Situated on the Station Road in Nagpur, Sri Ganesh Mandir Tekri is a Hindu shrine dedicated to Lord Ganesha.

Situated on the Station Road in Nagpur, Sri Ganesh Mandir Tekri is a Hindu shrine dedicated to Lord Ganesha. The temple boasts of rich architecture; the idol of Ganesha can be seen seated under a tree inside the premises of the temple. The busiest time of the day is during early morning or evening aartis.

An ancient and famous temple of Tekdi Ganesh is also known as ‘Tekadicha Ganpati’ which has an immense importance among the locals. The temple is located at Nagpur city of Maharashtra. A few years ago, the idol of Lord Ganpati was identified below the Shami tree. Later, the ancient idol of Ganesha was re-established it was considered as the deity of the town. The temple carries huge importance among Nagpurians who daily visit the temple. The name Tekdi Ganpati is attributed to its location as the temple stands on a hill which is called Tekdi in the Marathi language.

Tekdi Ganesh Temple is said to be 250 years old. The shrine of Lord Ganesha is believed to be self-existent, and its size is increasing over a period. During the early years, Tekdi Ganapati Temple used to be an ordinary shrine with a tin shade and a small platform. Later, the Military Defence wing took over its possession and renovations began in the year 1970. After acquiring the adjoining land in 1965, the construction of the Ganapati Temple started in 1978. It was completed in the year 1984. 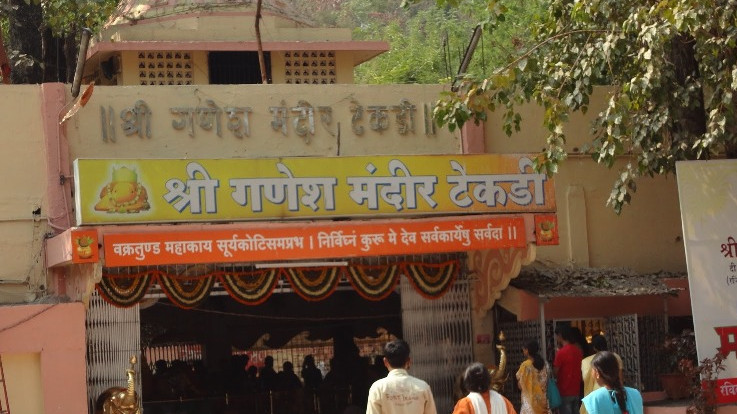 Late Ganpatrao Joshi and other devotees took an active part in the construction of the Shri Ganesh Tekdi temple. But the allotted land was comparatively small in respect to the large crowd of devotees. The Ministry of Defence granted an additional 20,000 sq ft land. Originally, the idol of Lord Ganesha was small, but gradually it grew bigger and bigger in size. The forehead of Lord Ganesha is adorned with gold ornamentation. Several worshippers believe that Tekdi Ganesh temple is a Jagruta Devasthan. The lamp lighting and Aarti ceremony are performed thrice in a day. 'Modaka' is distributed after performing Aarti.

On the day of Chaturthi of every month, a big congregation of pilgrims assembled in this temple. Every year in the Paush month on the Sankashti Chaturthi day, a grand yatra called Tekdi Ganapati Yatra is held. Apart from this Ganesh Chaturthi and Ganesh Jayanti are also celebrated with great joy.

By Road: Nagpur is very well connected to all the major towns of Maharashtra by road. Bus services and private vehicles are available to reach the temple.

By Air: The closest airport is Dr. Babasaheb Ambedkar International Airport which is located at Nagpur.

By Train: Nagpur is the nearby railway head.