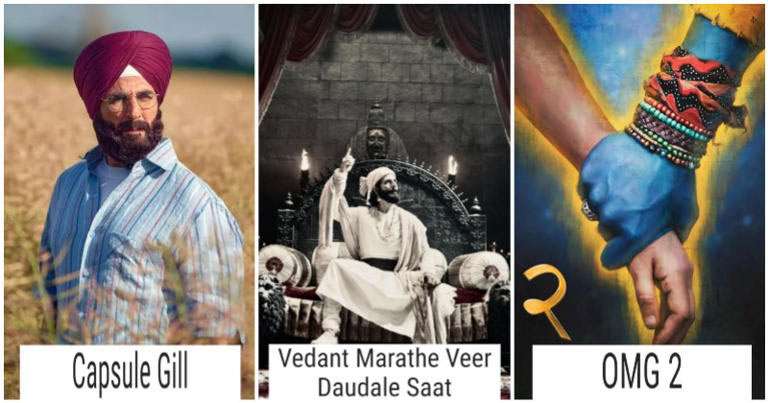 2022 has been quite possibly the worst year for Akshay Kumar, career-wise, as pretty much none of his films have worked.

The actor had 4 theatrical releases; Bachchhan Pandey, Prithviraj, Raksha Bandhan and Ram Setu which crashed at the box office and an OTT release Cuttputlli which couldn’t make any major impact.

But the actor seems rather unfazed by the fact that the ‘quantity’ of his films has clearly overshadowed the ‘quality’ and has announced his next six films in the year 2023.

Six films mean one film every two months, and this is a lot to handle even for a hardcore Akshay Kumar fan.

Interestingly, many people are now of the opinion that the actor has, clearly, not learnt his lesson from this year and is now just churning out films for the sake of money.

Well, it is true that the 55-year-old actor is quite possibly in the last leg of his acting career as a ‘leading hero’ and wants to do as many films as possible in that category.

Here is a list of Akshay Kumar’s films that are going to release in 2023:

Akshay Kumar and Emraan Hashmi will be seen together for the first time in the film Selfiee.

Directed by Raj Mehta, who has directed films like Good Newwz and JugJugg Jeeyo, the film will be a remake of the 2019 Malayalam film Driving License.

Produced by Dharma Productions, the film will have Diana Penty and Nushratt Bharuccha in pivotal roles.

A sequel to the super successful OMG released in 2012, Akshay will return as Lord Shiva in this satirical comedy-drama.

The film will revolve around the Indian education system and will also feature Yami Gautam and Arun Govil in important roles.

The film’s release date is yet to be announced, but the makers are looking for a May 2023 release date.

Akshay Kumar’s Capsule Gill will be based on a real-life incident.

This film will tell the story of an additional chief mining engineer Jaswant Singh Gill, who helped in the rescue of people when a coal mine in Raniganj, West Bengal was flooded back in 1989.

Parineeti Chopra will be seen opposite Akshay Kumar in this film and Tinu Suresh Desai will direct this film, who has previously directed Rustom.

Directed by Ali Abbas Zafar, the makers haven’t announced if the film will be a remake or a sequel to the 1998 super-hit film with the same name starring Amitabh Bachchan and Govinda, but if Akshay and Tiger are in it, then it will surely be an action-comedy.

The film will feature Janhvi Kapoor as the female lead and will probably release on Christmas this year.

The film tells the story of a young man from a remote village, who dreams of launching his own airline service.

However, he must overcome several obstacles and challenges in order to be successful in his quest.

Akshay Kumar and Radhika Madan will be seen in its remake and the title and the release date are still not disclosed, but the film will release next year.

Akshay Kumar will be debuting in the Marathi Film industry with this movie.

A Mahesh Manjrekar directorial, this film will feature Akshay Kumar in the role of Chhatrapati Shivaji Maharaj.

Recently, Akshay Kumar’s look as Shivaji had gone viral, however, he got trolled for his ‘weightless’ representation of the great Maratha King.

The film is all set to release on Diwali this year.