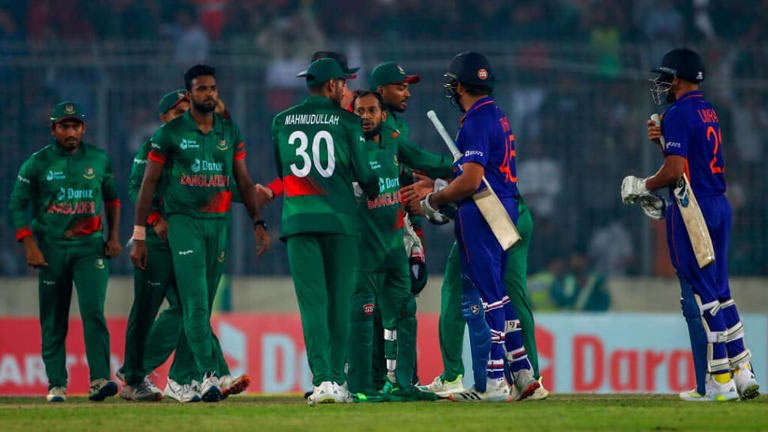 Off-spin all-rounder Mehidy Hasan Miraz turned out to be India`s nemesis for the second time in as many matches by hitting his maiden ODI century and picking two wickets to help Bangladesh clinch the series with a five-run victory over India in a thrilling second ODI at the Sher-e-Bangla National Cricket Stadium (SBNCS) on Wednesday.

From being 69/6 in 19 overs, Mehidy, with his unbeaten 83-ball hundred and veteran batter Mahmudullah, who made a fine 77, stitched a mammoth 148-run stand for the seventh wicket to carry Bangladesh to a respectable 271/7 in 50 overs. In defence, their bowlers were clinical in reducing India to 65/4 in 18.3 overs.

India were in troubled waters as Virat Kohli, Shikhar Dhawan, Washington Sundar, and KL Rahul fell within the first 19 overs. They were steered out of it by 82 from Shreyas Iyer and run-a-ball 56 from Axar Patel, with the duo sharing a 107-run stand.

Captain Rohit Sharma, despite a taping on his injured left thumb which forced him to leave the field in second over and couldn`t open, hit an unbeaten 51 off 28 balls in a courageous effort from batting at number nine and threatened to take the match away from Bangladesh. But it wasn`t meant to be as Bangladesh kept their nerve to maintain their perfect record of not losing a series at home since October 2016.

Shreyas began by paddle-sweeping Nasum Ahmed, while Axar slammed a six over the bowler`s head. Shreyas was quick in getting a brace of boundaries off Mehidy while Axar employed slog-sweep against Shakib Al Hasan for a huge six.

Post reaching his fifty, Shreyas used his feet well against spinners for boundaries and was fluent in his square drive, slice against fast bowlers. Just as he looked to go big for another six, Shreyas picked out deep mid-wicket off Mehidy. But Axar continued with his clean lofts and slog-sweeps against Nasum and Mehidy to get his second fifty of this year. He fell when Ebadot Hossain cramped him for room and forced the batter to hit straight to extra cover. Things got tougher for India as Shardul Thakur was stumped while Deepak Chahar holed out.

Rohit came with an injured thumb and swivel-pulled Ebadot for a brace of sixes, before timing an elegant off-drive. But with Mahmudullah conceding just a solitary run in the 47th over and Mustafizur bowling a maiden 48th over, things looked tough for India.

Rohit slog-swept and pulled Mahmudullah for a brace of sixes in the 49th over, where he was dropped twice in the deep, though the all-rounder castled Mohammed Siraj on the final ball.

With 20 needed off the final over, Rohit sliced Mustafizur through third man and in the gap between point and short third man. He swatted the left-arm pace down the ground for a six on the fifth ball, but Mustafizur had the last laugh as Rohit couldn`t get a run on a yorker, giving Bangladesh an unassailable lead in the series.

Earlier, Bangladesh were in tatters as the top-order failed to fire again, with Sundar taking three wickets while Siraj and Umran Malik troubled them with swing. But Mehidy and Mahmudullah joined forces to bail the hosts` out of trouble and lead an absolutely stunning recovery for Bangladesh.

Coupled with Nasum Ahmed`s 18 not out, Bangladesh made 68 runs in the last five overs as India`s bowling lost the plot for the second time in the series, with Rohit`s injured thumb and Chahar experiencing hamstring stiffness making things tough.

Mehidy began by cutting Sundar through backward point, while Mahmudullah had luck on his side when the top-edge flew over the leaping keeper off Siraj. The duo rotated the strike very well, while hitting the loose balls for boundaries.

Mehidy hit boundaries behind square mostly and even took on Sundar by dancing down the pitch to hit over long-on for six. He went on to employ the cut and slog-sweep to perfection against Axar`s left-arm spin.

Mehidy began the last ten overs phase with a nick off Thakur going to third man rope, while Mahmudullah drove on the up, swat-pulled and whipped off his wrists against the pacers. The partnership ended when Malik rushed Mahmudullah with a quick short ball, which the right-hander tried to slash and was caught behind by a diving keeper.

Nasum maintained the attacking tempo by carting Malik over mid-off for successive boundaries while Mehidy got a top-edge over keeper`s head to make it three boundaries off the over.

Nasum continued his onslaught when he cleanly lofted Siraj over his head for six, while Mehidy punched in the gap, drove off front foot and scooped Malik for three boundaries in the over. In the final over, Mehidy shuffled across to beautifully slog Thakur over backward square leg fence for six, followed by heaving him high over deep mid-wicket for another maximum. He reached his maiden ODI century in 83 balls with a single to long-on on the last ball of the innings, with the crowd giving him a rousing standing ovation.