Nitin Gadkari to Mercedes-Benz: Produce more cars in India so that middle-class can also afford them 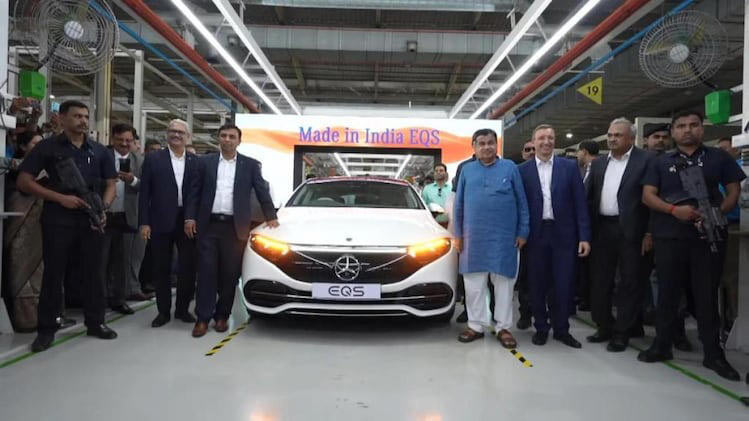 The country's largest luxury EV (electric vehicle) maker Mercedes-Benz on Friday launched India's first locally-assembled luxury the EQS 580 at the German manufacturer's Chakan plant in Pune. Union Minister Nitin Gadkari who has been pushing for India's transition to alternative fuels said that carmakers like Mercedes-Benz are encouraged by the government to produce and sell more EVs in India.

"Today, 35-40 per cent of the pollution is because of fossil fuels. That's why we're encouraging the automobile industry to make electric vehicles," Nitin Gadkari, Minister for Road Transport and Highways in the Government of India said at the launch. He added that around 30 per cent power in India is solar today. "Our aim is to turn it into 60 per cent," he said.

The minister added it's a matter of pride that Mercedes EQS 580 is made in India. He, however, had a request for Mercedes-Benz India. "I would request you to increase production in India, only then it's possible to reduce the cost for a middle-class person like me," Gadkari said.

The new Mercedes-Benz EV was launched at a price point of Rs 1.55 crores. "I'm making lot of express highways to create demand for you," he said to the Mercedes-Benz management.

He added that there is so much to learn from German philosophy. " Germans are very competent people. There are so many things we should learn from them. One is that their production 101 per cent perfect. This implementation is very important for the country," he said.

Currently, the Indian Automobile industry size is 7.8 lakh crore, out of which 3.5 lakh crore is export. "My dream is to make it a 15 lakh crore industry. In place of petrol, I dream of turning it to 100 percent ethanol. We want to diversify agriculture into energy and power sector with fuels like bio ethanol and flex fuel. Our government is not going to encourage petrol and diesel vehicles. With electric, green hydrogen and flex fuels, I'm confident that we'll get a good market in India," he said.

Gadkari said that today, the government is spending around 16 lakh in the import of fossil fuels . "The dream of our prime minister is for India to become an energy exporter rather than an energy importer," he said.