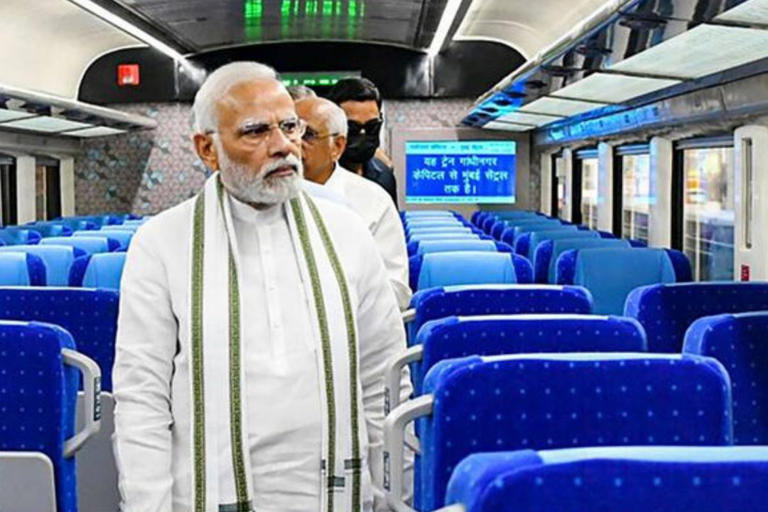 Hitching a ride with a motley crew of railway enthusiasts and YouTubers, Prime Minister Narendra Modi was as excited as his co-passengers to be travelling on board the new and upgraded Vande Bharat 2.0 train between Ahmedabad and Mumbai that he flagged off from Gandhinagar on Friday. Apart from the world-class features on display, the prime minister was struck by an entirely “unique feature” that he said none of the experts mentioned to him.

According to Prime Minister Modi, the noise inside the new Vande Bharat train is “100 times less” as compared to an airplane. He said that those who like to travel by air will prefer Vande Bharat trains once they experienced this feature.

“Vande Bharat makes 100 times less noise inside as compared to an airplane… People who are used to travelling on flights will prefer the Vande Bharat train once they get to experience it,” the PM said in Ahmedabad, adding that the train is “fast like a bullet”.

Addressing a rally at Ahmedabad later, Modi said his experience on riding the train was an exclusive moment. He said the train was so fast that he reached Thaltej 20 minutes ahead of his schedule.

Modi claimed to have been impressed by the clarity with which he could interact with co-passengers during the journey. “I am not an expert or scientist and the experts didn’t even mention this to me, but I felt like the noise was less than an airplane inside this train. It’s difficult to interact with fellow passengers on a flight because of the cabin noise, but I had no issues doing that on the train,” he said, adding that he was simply sharing his own observations and that maybe experts should take note.

The Vande Bharat Express semi-high speed train covered a distance of 492 km between Ahmedabad and Mumbai in five hours and 30 minutes on its inaugural journey, the official time stipulated by the railways. The train reaches 160 kmph in just 140 seconds. The Indian Railways promises passengers an aircraft-like travelling experience and advanced safety features, including Kavach, which is an indigenously developed train collision avoidance system.

Over 370 passengers travelled on board for the inaugural run with railway enthusiasts, YouTubers, railway officials, security personnel and mediapersons in attendance. Passengers clicked photos as well as shot videos during the journey.

“PM @narendramodi is on board the Vande Bharat Express from Gandhinagar to Ahmedabad. People from different walks of life, including those from the Railways family, women entrepreneurs and youngsters are his co-passengers on this journey,” the Prime Minister’s Office (PMO India) said in a tweet.

In photographs attached with the tweet, Modi is seen interacting with railway officials, women entrepreneurs and others on board. The train, which connects the capital cities of Maharashtra and Gujarat, is the third Vande Bharat Express.

The first such train was started on New Delhi-Varanasi route, while the second one on New Delhi-Shri Mata Vaishno Devi Katra route. The new Vande Bharat Express train will reduce travel time between Ahmedabad and Mumbai from eight hours to five-and-a-half hours.