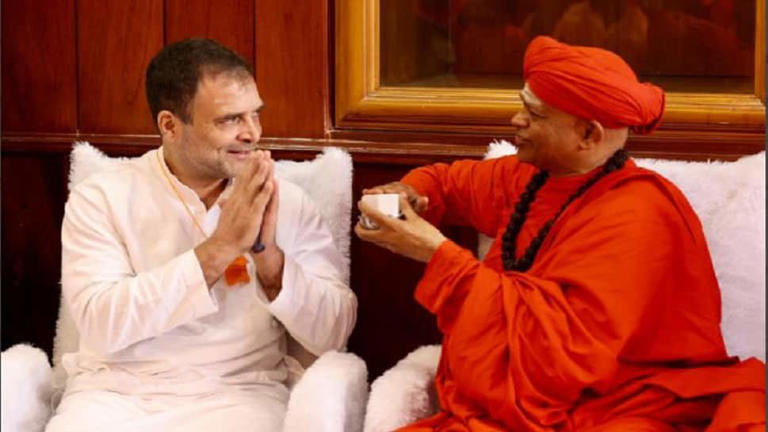 'Rahul Gandhi will become the Prime Minister', said a Mahant of a Lingayat Math in Karnataka on Wednesday (August 3). But as soon as these words came out from his mouth, he was stopped by the head of the Math, Mahant. He also blessed Rahul, but added a warning. Assembly elections will be held in Karnataka by May next year. Before that, Congress is struggling because of internal rift. In this situation, Rahul Gandhi visited the southern state. Apart from establishing unity in the party, he is also doing public relations work keeping the elections in mind.

For that purpose he went to Sri Jagadguru Murugharajendra Math in Chitradurg district. There, a Mahant named Haveri Hosamath Swami blessed Rahul Gandhi and said, "Rahul Gandhi will become the Prime Minister." According to sources, as soon as he said this, he was stopped by the head of the Math, Mahant Sri Shivamurthy Murugha Sharanaru. Then Chief Mahant said, "Please don't say this... This is not the platform. People will decide."

Lingayats play a major role in Karnataka politics. 18 percent of the state's population belong to this community. Generally, BJP gets votes from this community. In 2019, the BJP came to power after overthrowing the Congress-JDS government. Initially, BS Yeddyurappa was made the Chief Minister. He belonged to the Lingayat community. In 2021, he was replaced by Basbaraj Bommai as Chief Minister. He also belongs to the Lingayat community. Rahul Gandhi is trying to build the land of Congress within these Lingayats.

However, within the state Congress, there is now a strong rift. Return to power is a long way off. But, who will be the chief minister face, there is tension already. Leader of the Opposition in the Assembly Siddaramaiah and State Congress President DK Sivakumar both want to be the chief ministerial candidates. Rahul Gandhi held a meeting with party leaders on Tuesday night. He ordered both parties to work together. He also warned that no one should make any comments in public, no matter how many disputes are there within.