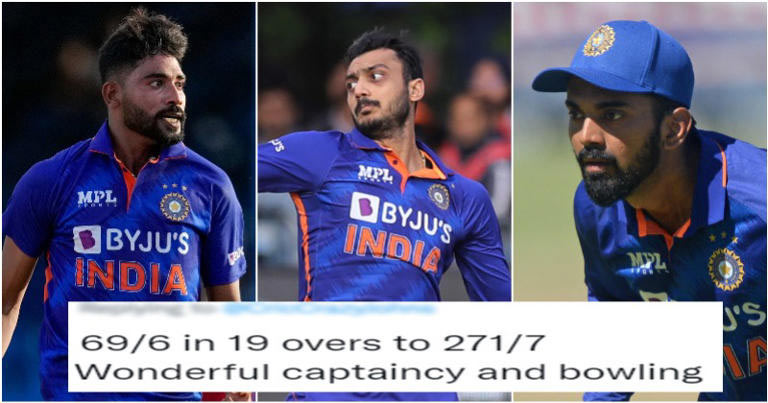 Injury to Rohit Sharma in the early stages of the second ODI between India and Bangladesh in Dhaka meant that KL Rahul called the shots for Men in Blue in the middle.

Rahul, who got brutally trolled despite scoring a half-century in the first game, once again managed to catch the attention of fans as his planning and tactics allowed Bangladesh to make an unbelievable recovery on Wednesday (December 7).

India had Bangladesh down and out by picking up six wickets and conceding only 69 runs. However, Mehidy Hasan, who played a key role in Bangladesh’s win in the series opener, once again proved to be the Achilles heel of Indian bowling.

Mehidy brought up his maiden ODI century and helped Bangladesh score 271 runs, which no one would have imagined, considering they had lost more than half of their side with less than 70 runs on the board.

Disappointed with the field placements and poor bowling, Indian cricket fans took to Twitter to lambast the stand-in skipper KL Rahul and bowlers for allowing Bangladesh make a comeback into the contest.

KL Rahul had fielders inside the 30-yard circle and his bowlers kept dishing out deliveries to Mehidy and Mahmudullah, enabling them to clear the fielders down the ground and pick up easy boundaries.

When pacers Umran Malik and Mohammed Siraj were bowling, KL Rahul did not place a slip and both batters got a few boundaries through that region.

While the captain missed a trick with his field placements, bowlers too didn’t help his or the team’s cause.

All pacers kept bowling short balls and got whacked for boundaries. India conceded over 100 runs in the last 10 overs.

Siraj was the most expensive of the lot with figures of 73 for two in his spell of 10 overs while Axar Patel, who replaced Shahbaz Ahmed in the playing XI, bowled seven overs and gave away 40 runs without picking up any wickets.

India will be hosting the 50-over World Cup next year and looking at their recent performances in the format, a lot of work needs to be done if the Men in Blue want to recreate the success of 2011 when they last won the ODI World Cup.