Naga Shaurya ties the knot with Anusha Shetty in a grand ceremony; first pics out 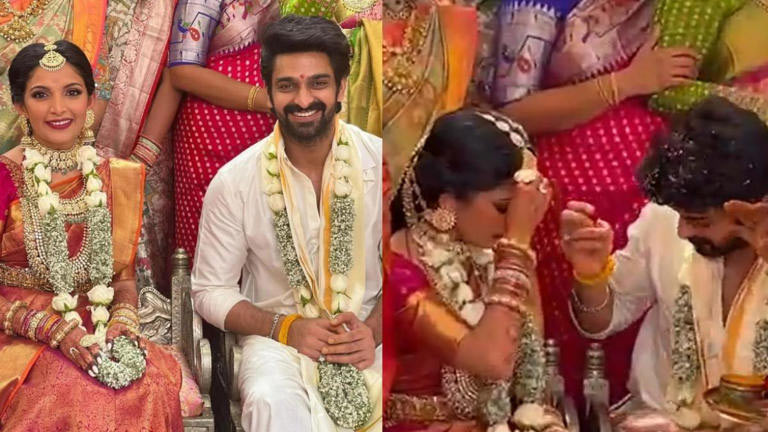 After much buzz, Telegu actor Naga Shaurya married long-time girlfriend Anusha Shetty in a grand ceremony in Bengaluru on November 20. The first pictures of the newlyweds were shared on paparazzi and fan pages on social media. A video of the actor putting sindoor (vermillion) on Anusha, has been surfacing on social media.

For the big day, Anusha looked gorgeous in a red bridal saree with heavy gold jewellery. On the other hand, Naga Shaurya looked like a heartthrob in a traditional white vest and shirt. The viral pictures showed the couple performing wedding rituals in the presence of family and friends.

The couple kick-started their pre-wedding festivities on November 19 with a Mehendi ceremony at a plush hotel. The dress code for it was Indian festive – pastels. This was followed by a cocktail party at night where the dress code was western or Indian formal. For the Mehendi ceremony, Naga Shaurya opted for a blue kurta with a black Patiala. On the other hand, his wife-to-be was dressed in an embroidered lehenga in shades of orange, green, and pink.

Naga Shaurya and Anusha are expected to host a grand reception for his colleagues from the Telugu film industry in Hyderabad.

Meanwhile, on the work front, Naga Shaurya was recently seen in Krishna Vrinda Vihari. The film opened to a positive response from critics and fans alike. The actor recently signed his 24th film, which was officially announced. He is currently shooting for Rangabali, an action entertainer and an untitled Telugu film that was launched recently. Both his upcoming movies are expected to be released next year.