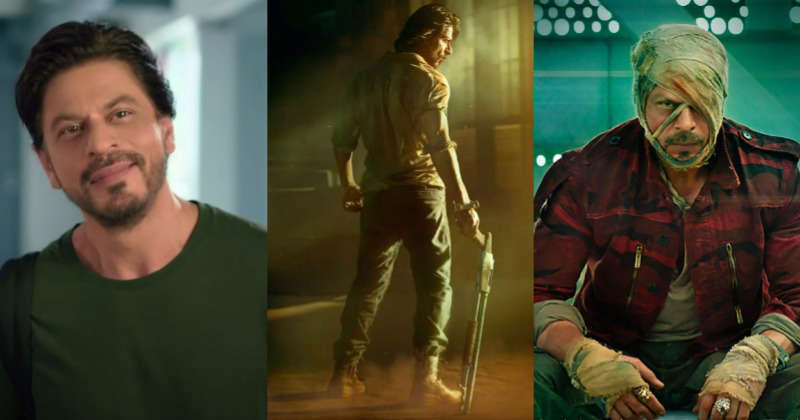 Shah Rukh Khan is making a comeback to films after a break of over four years and is all set to rock the box office with not one or two but three massive movies like Pathaan, Jawan & Dunki.

All the three films belong to different genres and have the potential to hit at least Rs 300 crore each at the box office which means SRK can create history in 2023 & rake in Rs 900 crore in a single year.

Trade Analysts are hopeful about the same as well.

When asked about the possibility of Shah Rukh Khan hitting Rs 900 crore in a single year with his three upcoming films, film exhibitor and distributor Akshaye Rathi told Bollywood Hungama, “Yes it is possible, just by going by the setups that these films have. You have Siddharth Anand coming immediately after War. You have Atlee who perennially has been in phenomenal form. And you have Rajkumar Hirani who has never gone wrong till date. Shah Rukh Khan’s stardom, meanwhile, is not an overnight fad. It’s something that has been built over 30 years. It’s a true-blue real stardom! If the films work, I do not doubt that all of these could be absolute mega-scale blockbusters. I really hope that happens as there are very few stars who rake in the big money, thus benefiting the entire value chain. When a film does Rs. 300 crores, it’s not like it entirely goes into the producer’s pocket. It goes to everyone, from the exhibitor to the agents to the distributors to sub-distributors to the producers to the actors. So, if Mr Khan can do that for the industry, it’ll be absolutely incredible.”

Trade analyst Komal Nahta, “I have not seen the films. I would love to believe that every film is going to be a blockbuster. And Shah Rukh Khan has delivered so many times. So, it is very possible.”

On the other hand, trade analyst Taran Adarsh believes the films can even do over Rs 1000 crore not just Rs 300 crore. He said, “Why just Rs. 300 crores? The sky's the limit! You never know. It could be even Rs. 1000 crores. No one knows the content as of now. But I am sure that Shah Rukh is going to play this innings very smartly. He’s taken a lot of time to greenlight these projects. After Zero, he didn’t announce any film and rightly so, as he was doing introspection. He was taking time as to what kind of projects he should do. He can’t portray the same types of roles that he has portrayed in the past. The audience wants to see a different Shah Rukh Khan. I am sure that these films will be promising a lot more than the usual Shah Rukh Khan experience that we have had in the past.”

He further added, “Amitabh Bachchan at his career’s peak used to have 6-7 films releasing in a year. Each one was a money-spinner. Imagine celebrating 6-7 silver jubilees in a year! So, the market has the capacity. Hence, why not give them some good films?”

Jawan, directed by Atlee, and also starring Nayanthara will release in theatres on June 2, 2023.