'Never Seen Anything Like This': The Mood in Eknath Shinde's 'War Room' 3,000 km from Maha Battlefield 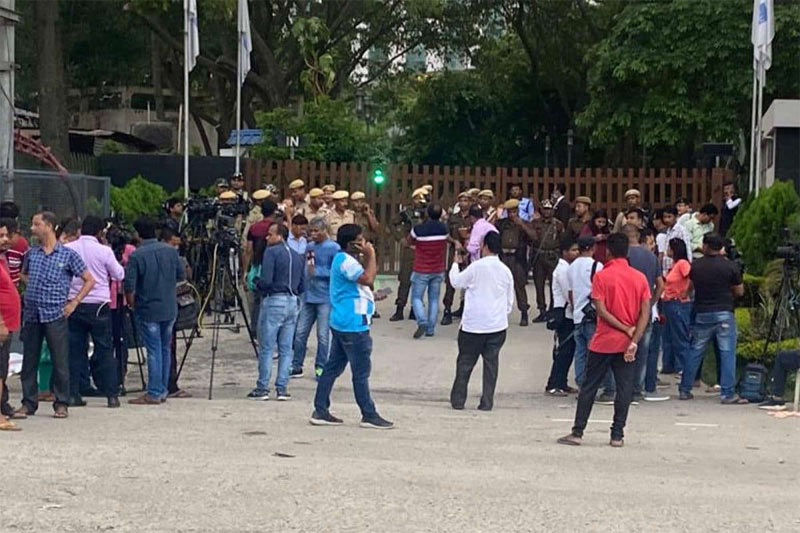 The Radisson Blu in Guwahati has hosted VIPs in the past, but none of those experiences could have prepared it for the kind of attention it is receiving now. It’s roughly 3,000 km from Mumbai, but the luxury hotel is the venue where the political futures of Maharashtra, Shiv Sena and the Thackerays are being written.

And the one wielding the mighty pen is Maharashtra minister Eknath Shinde. Arriving in Guwahati from Surat on Wednesday, Shinde and his 30-odd camp trooped into the hotel. Soon, their numbers swelled. The rebel faction, which is demanding that the Thackerays walk out of the alliance with the Congress and NCP, is now said to include more than 40 MLAs besides Shinde.

Located in the outskirts of Guwahati, the hotel soon turned into a fortress with the entry of mediapersons banned. Assam Police took over security from the hotel’s private guards and only vehicles and guests on the hotel’s list were being allowed in.

“We have never seen anything like this. We are checking every single person,” a staff member told News18 on condition of anonymity.

The hotel has turned into a ‘war room’ for the Eknath Shinde camp which is adamant on its demand to quit the Maharashtra Vikas Aghadi alliance despite Chief Minister Uddhav Thackeray‘s emotional appeal and offer to quit before leaving the official residence.

The dissident legislators were reportedly received at the Guwahati International Airport on Wednesday morning by Assam BJP MP Pallab Lochan Das and MLA Sushanta Borgohain. “The MLAs are known to us. They came here and we have received them as a matter of courtesy,” Borgohain told the media.

Talking to the media, Assam Chief Minister Himanta Biswa Sarma said: “Forty people came to Assam. This is good. We are happy if more people come. We hardly have any tourists during this time. Some of our colleagues are there (with the Maharashtra MLAs). I will meet them if I find time. Presently I am going to oversee the flood relief activities.”

The Congress has criticised the Assam Chief Minister for “conspiring” to bring down the Uddhav Thackeray government in Maharashtra at a time when Assam is devastated by floods.

Assam Congress President Bhupen Kumar Borah alleged that some 40 MLAs of Maharashtra have been held to ransom in Guwahati. “Sarma is involved in a shameful act,” the Congress leader said.

“The Chief Minister should concentrate on his own job and provide adequate relief to the flood-hit people of Assam. He can do his politicking later, not when people are crying for government support,” Borah tweeted.