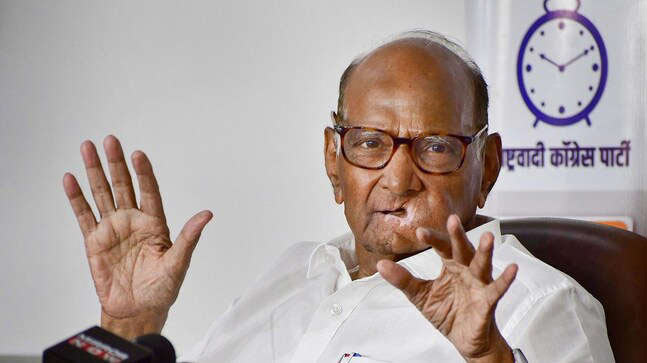 After the Maharashtra assembly polls in 2019, the NCP, Congress and Shiv Sena came together in an unlikely alliance to form the government in the state, outmanoeuvring the BJP, which had emerged as the single largest party. Since then, many leaders in the saffron party had made pronouncements that the three-party coalition would collapse within months.

Now that the Maha Vikas Aghadi (MVA) government has crumbled, NCP chief Sharad Pawar is the one counting down the days till the new government falters. The veteran politician has augured that mid-term polls are likely in Maharashtra as the Eknath Shinde-BJP combine will fall in the next six months.

He made the statement during a meeting with NCP MLAs and other party leaders in Mumbai on Sunday evening.

"The newly formed government in Maharashtra may fall in the next six months, hence all should be ready for mid-term polls," Pawar reportedly said, according to an NCP leader who spoke to PTI.

The NCP leader went on to say that Pawar told them that the rebel Shiv Sena MLAs supporting Eknath Shinde are unhappy with the current arrangement.

"Once the ministerial portfolios are distributed, their unrest will come out, which will ultimately result in the collapse of the government," the NCP leader quoted Pawar as saying.

The leader added that Sharad Pawar had expressed hope that the dissident MLAs would return to the party fold after the failure of their "experiment" with the BJP.

If all we have is six months, NCP legislators should spend more time in their respective assembly constituencies, he said.

Eknath Shinde was sworn in as the chief minister of Maharashtra on June 30 following the collapse of the MVA government, while senior BJP leader Devendra Fadnavis took oath as his deputy.

Around 40 Shiv Sena MLAs led by Shinde rebelled against the party leadership, plunging the Uddhav Thackeray-led coalition government into crisis. After a 10-day standoff marked by threats, entreaties, legal battles and further desertions, Uddhav Thackeray resigned as CM on June 29, paving the way for Eknath Shinde to stake claim to form the government with backing from the BJP and Independents.

Today, the four-day old Shiv Sena-BJP government will face a floor test in the Maharashtra Assembly. Ahead of the trust vote, newly appointed Speaker Rahul Narvekar dealt twin blows to the Uddhav Thackeray faction of the Sena, by reinstating Shinde as Shiv Sena legislature party leader.

He also recognised the appointment of Bharat Gogawale from the Shinde faction as the chief whip of the Shiv Sena, removing Sunil Prabhu, who belongs to the Thackeray camp.